At Star Micronics, our basic approach to corporate governance is based on fulfilling our social responsibilities as a company. To this end, we strive to achieve appropriate and efficient management with a view to the sustained enhancement of corporate value and the realization of a sustained society, and to distribute these the results of these efforts appropriately to shareholders and other stakeholders.

(1) Summary of Corporate Governance System and Reasons for Its Adoption

Star Micronics has adopted the structure of a company with an audit and supervisory committee in order to strengthen the supervisory function of its Board of Directors and to enhance its corporate governance capabilities.

Furthermore, an executive officer system was introduced to Star Micronics to speed up and raise the efficiency of business execution even further, and ensure that management as an organization is flexible and capable of prompt, rational decisions for executing business.
The Board of Directors is comprised of four Directors (one of whom is an independent Outside Director, excluding Directors who serve as Audit and Supervisory Committee Members) and three Directors who serve as Audit and Supervisory Committee Members (all of whom are independent Outside Directors), and is responsible for appropriate and efficient management decisions while supervising the execution of Directors’ duties from an independent standpoint.

(2) Overview of Limitation of Liability Agreements

Star Micronics strives to maintain an internal control system that will enable proper and efficient management to drive a continuous increase in corporate value.
To strengthen internal control, the Star Micronics Global Code of Conduct was drawn up for employees to follow, and we have been working to establish rules and organizational structures to ensure compliance at every level of our activities. In addition, a department dedicated to promoting corporate social responsibility (CSR) spearheads our compliance activities. This department plays a central role in providing reminders and education on compliance to the Group’s directors, executives and employees, and is charged with holding periodic committee meetings and monitoring the status in regard to the Group’s adherence with all relevant laws and regulations.
Star Micronics also has an appropriate internal control and whistleblower system for ensuring the reliability of its financial reporting, as stipulated in the Financial Instruments and Exchange Law of Japan.

(4) Status of the Risk Management System

Star Micronics approaches the management of material risks such as legal issues, natural disasters, environmental considerations and export management in an organized and systematic manner. Departments and individuals are assigned as needed to manage a specific risk, and take responsibility for establishing rules and manuals, etc., for managing the risks. They also implement programs to alert, educate and prepare the Group’s directors, executives and employees against the risks. There is also a committee which meets periodically to monitor and manage risks for the Group.

The director or executive officer that heads the division in charge of each subsidiary obtains the Company’s approval and/or submits to the Company all essential reports of in connection with important decisions made and facts pertaining to the subsidiary in accordance with the Company’s internal rules and regulations.

The Articles of Incorporation stipulate that the Company shall have no more than 10 directors.

4. Requirements for Resolution on Selection of Directors

5. Resolutions of General Meetings of Shareholders that can be Resolved by the Board of Directors

The Articles of Association stipulate that the Company may decide a resolution about Article 459-1 of the Companies Act of Japan in accordance with resolution of the Board of Directors unless otherwise provided for in the laws and regulations. This is to enable agile execution of capital structure policies and dividends polices.

6. Requirements for Special Resolutions by the General Meeting of Shareholders

The Company’s corporate governance system is outlined as follows: 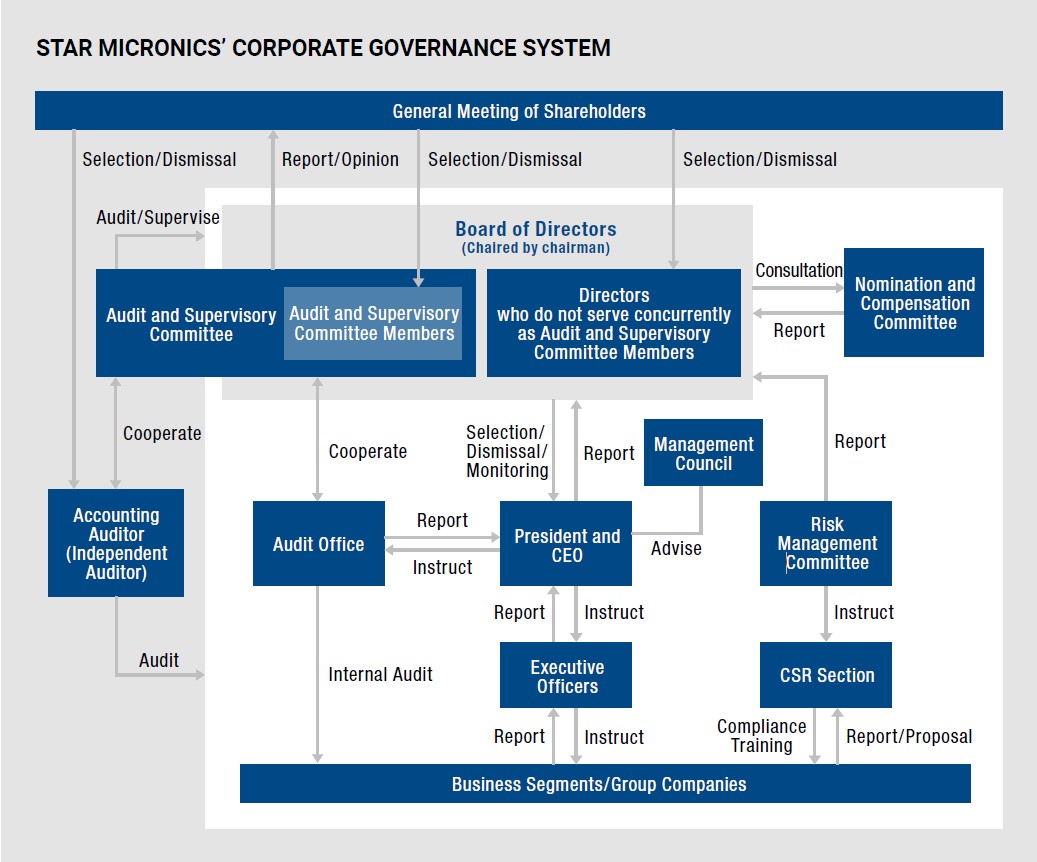